Wind causes and spreads dust.  Slowing the wind is therefore the key ingredient in any dust control strategy. The effectiveness of the windbreak is related to the size of particle being blown around. Very fine particles are hard to control and need to be agglomerated too.

Control of the small material is important because the sub 10micron particles (PM10’s) can cause respiratory problems for your workers. The larger fences are worth controlling for three reasons. Firstly because of their economic value, secondly because of their visual and environmental impact on the area, and finally because of the extra equipment maintenance they cause.

Dust comes in every size. It starts at the microscopic lung-clogging sub 10 microns size. It is still a problem all the way up to the easily visible paint-stripping 1000 micron plus sizes.

Some dust gets in the air by mechanical means such as truck tires, conveyor transfers and conveyor discharges. Other dust is lifted off the ground by the wind. In either case, the distance the wind blows it each day depends on the vagaries of the wind and the size and weight of the particle.

The lightest, smallest dust particles can get caught in wind up draughts like a glider. When this happens, they can be blown many miles (sometimes thousands of miles).

Larger particles will be blown a distance as they fall from (say) a conveyor. After they hit the ground they then move along the ground in a skipping motion (like a rock thrown across the surface of a pond). The movement across the ground (called saltation) depends on the winds peed, the roughness of the ground and the size and weight of the particle. Particles which are too heavy to saltate in a given wind may still be moving by rolling. As the wind speed increases, larger and larger particles begin moving, and the smaller, saltating particles start getting lifted into the general airflow.

For example, on a “rocky” stockpile, reducing the wind from 20 mph to 5 mph would make the mostly saltating 150 micron particles stationary, removing 5% – 13% from the vulnerable range.

The charts below highlight the effects discussed above. [Note that “wind speed” refers to the standard speed of the wind which is measured 33 ft above the ground. The speed near ground level may be half that number. 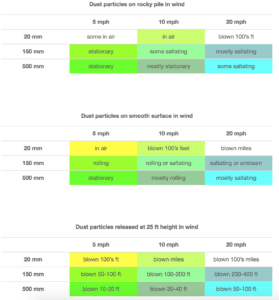 The charts show that the smallest sizes are very easily blown around. It is fortunate that they usually do not constitute a large percentage of the total material.

The larger material is more stable, particularly if it lands on rough ground (such as a stockpile). Note that the most vulnerable range is “150 microns” which may easily account for 10% of the total production.

Ores: In many ore mines, the percentage of ore is much higher in the fines, so the 10% of throughput may in fact be 20% or more of the actual ore.

Coal: Coal is a brittle material where the percentage of fines can be dramatically increased beyond the ranges above. Three causes are: