Why have a wind fence?

Wind causes erosion and transports dust, spray, and other pollution.

The effect of the wind varies according to the situation.

A windbreak (also called a wind fence or wind shelter) can reduce windspeeds by over 50% of the incoming windspeed over large areas, and over 80% over localized areas.

More about wind reduction patterns is given below.

What does a wind fence do?

A wind fence slows the wind in one place by deflecting it to another. The best windbreaks produce a zone behind the windbreak which will have wind of about a quarter of the speed. For a 50ft (15.24m) high windbreak this zone will extend about 250ft (76m) downwind. From 250ft (76m) to 500ft (152m) the windspeed will increase up to about half that of the incoming wind. Beyond that windspeeds increase quickly.

[NOTE the terms windbreak, windfence, wind shelter, shelter fence, and wind screen are used interchangeably here. Purists might see a windbreak as a row (or several rows close together) of trees, yet a fabric or artificial shelter achieves the same thing, so it is easiest to use windbreak as the general term.] 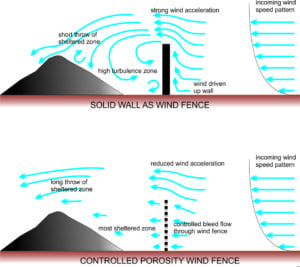 The wind is like a river, with the earth equivalent to the bottom of the river. Water flows and tumbles over the river bottom. The faster the flow, the more tumbling (turbulence).
If we were to throw a large rock into the river, we would create a sheltered spot immediately behind the rock. This is a windbreak in its most basic form. The problem is that just past the rock, the water that had been deflected over and around the rock would come crashing down and in.

Windbreaks control the amount of “crashing down and in” by letting a little wind flow through. The wind flowing through holds the faster (deflected) wind away for a few hundred feet. This lets the winds merge together again more gently with less turbulence. The effects are shown in the drawing which shows a side view of a well-designed windbreak and the windspeeds around it.

Well-designed windbreaks typically reduce fugitive dust to less than one eighth of the unprotected situation. This is because erosion is proportional to windspeed cubed. In other words a pile that was previously losing a ton of dust a month would be down to losing less than 250lb (113 kg) per month!

Industrial Windbreaks are also used for 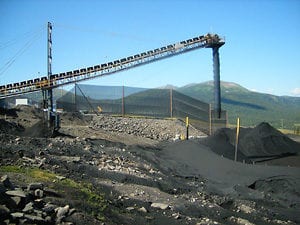 Dust control fence for a coal mine in Northern BC. Fence is 40ft (12m)high. Poles are individually guyed to resist wind loads